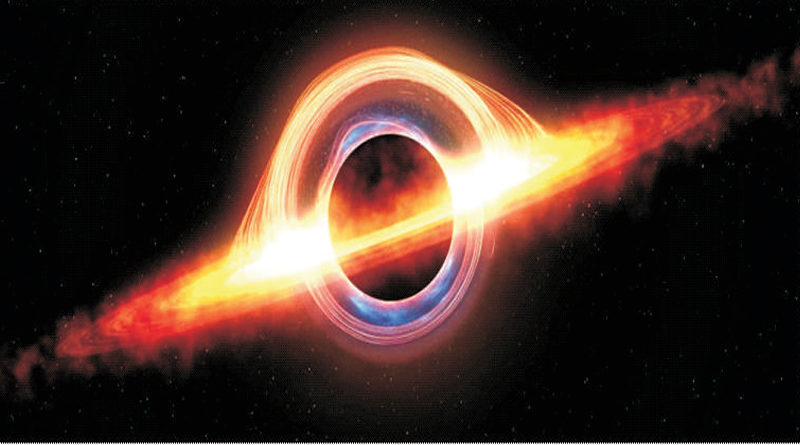 Singularity is a non-dimensional point that contains huge mass in an infinitively small space where density and gravity became infinite and space time curves infinitely, thus the laws of Physics do not operate. In essence it is the point where all laws of Physics cease and fail to operate. Any object approaching the singularity at center will became spaghettified due to increasing gravitational attraction on different parts of it. The approaching object disappears at singularity. Herethe Albert Einstein’s Theory of relativity suggests that an observer watching from outside would see the object moving slower and slower until it gets collapsed and thus never actually falls into the singularity.

As of now many models had been designed predicating naked singularities but unfortunately all models relied upon five dimensions and but now a model has been created predicting naked singularities in four dimensions. The model shows that naked singularity can yield what is called anti-desitter space, a curved saddle shaped space in which light does not travel linearly instead it travels a bit inward curved towards boundary and finally gets reflected back. Experiments prove that naked singularity is likely to disappear if we will include charge particles in simulation. A model of the black hole will be also released in the later part of 2018, but unfortunately Stephen Hawkins, the person who dedicated his whole life studying black holes would be here to witness the model.

Scientists are carefully working on the concept of naked singularities and if it comes true it will provide a connection between cosmic censorship conjecture and weak gravity conjecture. Any consistent theory of Quantum Gravity must contain sufficiently charged particles. Thus in anti-de-sitter space the cosmic censorship conjecture must be saved by weak gravity conjecture. Cosmic Censorship hypothesis states that a black hole singularity always remains hidden behind event horizon which does not allow light to escape and thus cannot be observed. It seems like the nature wants to conserve the secrets beyond the universe and we would never be able to fully describe or understand singularity. Although we can send signals to the singularity but most of the theories suggest that nothing inside the singularity of black hole will communicate with the outside. Current research on Super Strange may be able to provide more knowledge about singularity and hopefully mankind would be able to explore nature and singularities more.

This year we lost one of the modern greats of Physics ‘Stephen Hawkins’ who worked on the no hair theorem of black holes which stated that black holes can be characterized by three numbers; their mass, angular momentum and charge. Hawkins came up with the law which states that the total surface area of black hole will never get smaller also known as “Hawkins Area Theorem”. The Classical Physics says that black holes could never radiate heat. Stephen Hawkins worked thoroughly on black holes and concluded that black holes could emit heat and eventually vanish. The process is very slow, it takes More time than the age of universe for a black hole to evaporate, but the black holes with smaller size evaporate faster and release heat with the spectacular rate. In the last tenth of second, a black could explode with the energy of a million one megaton hydrogen bombs. Hawkins theory could also be used to calculate the proprieties of universe we see around us.

Irony is that in the early 1990’s Stephen Hawkins said that the naked singularities can’t exist and bet his friends Caltechs Kip Throne and John Preskill that naked singularities cannot exist, the loser has to gift the winner clothes to cover naked body. Months later Hawkins actually found mathematical evidence that when a black hole finishes evaporating, it might leave behind a naked singularity. Hawkins lost the bet gave Throne and Preskill T-shirts featuring woman in a towel with the quote “ Nature abhors a naked Singularity” It actually sounds awkward, but one of the peculiar aspects of quantum mechanics predicts that a pair of particles can spontaneously pop into existence with one on either sides of the event horizon.

Many researchers has found that if our universe had a different number of dimensions then it can form naked singularities. Fortunately if we get a chance to learn a real naked singularity it can rewrite physics and would be great landmark, thus we can understand universe in a better way. We would be able to study an object that is governed by both quantum mechanics (the science of very tiny objects and the general relativity (the science of massive objects). It will create peculiar revelations. We would be studying something very massive and something very tiny at a same time. Thus such unified theory will reveal more secrets of universe created by God!

2 thoughts on “From Singularity to Naked Singularities!…”