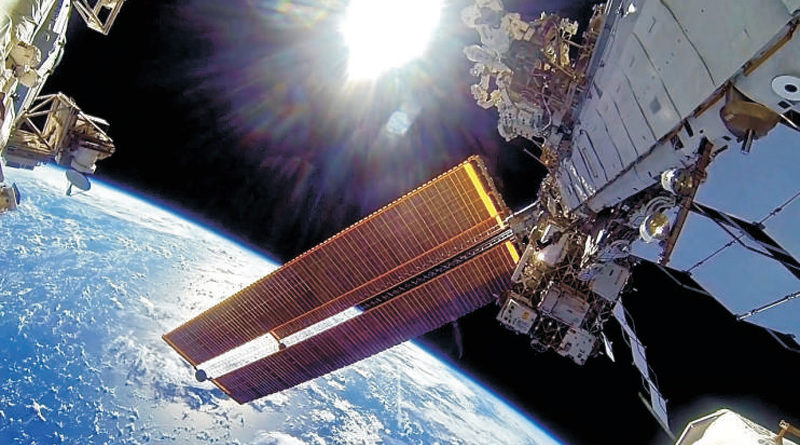 Though the Indian space program started nearly 20 years later than in developed countries, today it has emerged as one among six nations i.e. USA, Russia, Europe, China and Japan having total indigenous capability in building satellites for earth observation communication and scientific research as well as launch them into orbits around earth and even take them to moon or Mars. Indian launch vehicles like PSLV, GSLV have proven track record and cost effectiveness so that even developed countries are approaching ISRO for launching their satellites. While perfecting these high technology ISRO’s focus was on making use of them for the benefit of society. Direct to home transmission of TV signals, connectivity to banks and financial organisations, telemedicine, tele-education and disaster warning system are a few examples of that. While fulfilling the dreams of the founding father of Tndian space program, one has to look at what next. Space is going to be the next frontier for human exploration and presence of humans in outer space and planets is going to be the next challenge. Though USA, Russia and China have already taken a lead, India is yet to make an entry into this field. Though need for new initiatives in this field was felt nearly a decade back, the formal approval was given by the Prime Minister through his 2018 Independence Day declaration that India will be having its own human space flight in 2022.

This is really going to be a great technology challenge but the goal has to be met if we have to maintain our leadership position in the global scenario. Important developments related to the human space flight are the Crew module, life support system, Crew escape system and improvement in the overall reliability of the launch vehicle. Once in orbit, the capsule will be in almost zero Gcondition and hard vacuum and will be subjected to heavy radiation. Creating living conditions inside the module to support human life, providing oxygen, water and food as well as waste disposal for several days needs development of innovative technologies. Training of astronauts to face zero Gas as well as high acceleration levels during launch and re-entry needs thorough understanding of behavior of human physiology and psychology as well as conditioning the astronauts by going through a series of simulated environmental tests. A branch medicine i.e. space medicine will emerge. Such facilities are not available in the country and need to be established through fresh development programmes.

The PSLV and GSLV have emerged as reliable satellite launch vehicles globally. That is the reason that other countries including USA, Europe and Canada are approaching ISRO for launching their satellites.

Demonstrated reliability of these launchers are around 95 per cent but not adequate to carry the manned capsule. Space Shuttle had estimated reliability level of 99 per cent, still NASA took the risk of sending astronauts in that. It is sad that they encountered two failures out of its 136 launches. No one will accept such level of risk now. The Space shuttle is decommissioned and further efforts are on to develop a new launch system in USA. At present the only launcher available for the free world for human space flight is Russian Soyuz rocket. Though the Chinese Long Marchcan do such missions it is used only for their national needs. Though the GSLV MkIII recently developed by ISRO can take the manned capsule weighing nearly 10 tonnes to low earth orbit, improvement of reliability of the launch system is a must before it carries human on board. The entire design and test results will have to be revisited. Designs margins have to be enhanced wherever required. More important is introduction of redundant and fail safe systems to ensure safety of the crew. This will have to be supported with adequate number of tests and simulations.

Providing oxygen and maintaining the temperature within reasonable limits, shielding the external radiation of charged particles and providing waste management onboard are other new developments. After completing the orbital mission, breaking the orbit, sending the module in precise trajectory in guided manner and managing re-entry heating load using appropriate ablatives and material which can withstand high temperatures require advanced materials and techniques.

Today’s knowledge society is totally dependent on digital connectivity. Geo stationary satellites always provided solutions for this. The recent launch of GSAT11 is a clear example of how space is supporting the needs of the country in this area of high speed digital connectivity. Such resources will have to be multiplied. Advanced satellites with higher data throughput and coverage to every nook and corner of the country need new ideas and techniques. Through this, digital connectivity is assured not only to remote rural areas but also the doorstep of the poor. While access to knowledge is extended so are the services like health care through telemedicine. Today, telemedicine is limited to remote consultation but the day is not far off when even tele-surgery can be done using satellite connectivity.

Today, space based services are efficient but expensive. The cost of  launching satellites contribute a major share in this. If schemes are developed to recover and reuse the launch hardware considerable saving in cost can be achieved. Also, use of new propulsion systems using less expensive fuel like kerosene could bring down costs. Development of new generation launch vehicles along these lines poses several technology challenges before ISRO. One should not be lagging behind others in launch capacity. When they are targeting even 100 ton to orbit we should aim at least 20 ton in the near future.

Space research always has been fascinating and India has not lagged behind. Future challenges related to space exploration, space travel, tourism application programmes based on space assets spin off technology benefits etc are going to provide lot of opportunity to the new generation. Those who are adventurous can plunge into it and reap the benefits.

While all attempts will be made to have a reliable launch system there is a remote chance there could be some chance of failure. In such a case how to bring back the astronaut has to be addressed. Recently, ISRO has demonstrated a crew recovery experiment using which astronauts will be ejected from the launch system and brought back to earth in case of a mission abort. The basic design of a space suit, crew module, its landing and recovery process from sea were demonstrated as part of the technology development. Development of new technologies and systems to perfect the manned mission are demanding a lot of innovation and hard work by thousands of scientists, technologists and supporting staff over the next few years.

Developing space transportation system and enabling humans to stay in earth orbit for few days and bringing them back is only a small step forward, It will provide a platform for detailed observation of planet earth, scientific observation and studies of stars and galaxies Conducting chemical or biological experiments under zero G condition to generate new molecules are some of the benefits. At the same time, people are dreaming of sending people to Moon and Mars with the idea of exploiting resources from the neighboring planets and even colonizing them. But it all needs not only new developments but also large funding. International cooperation, pooling the technologies and financial resources are the only way to achieve such ambitious goals.

There are concepts suggesting variation in magnetic and electric field around the earth which can be monitored using satellites which give indication of eminent earthquakes but this has to be validated and a lot of efforts are required in this area.