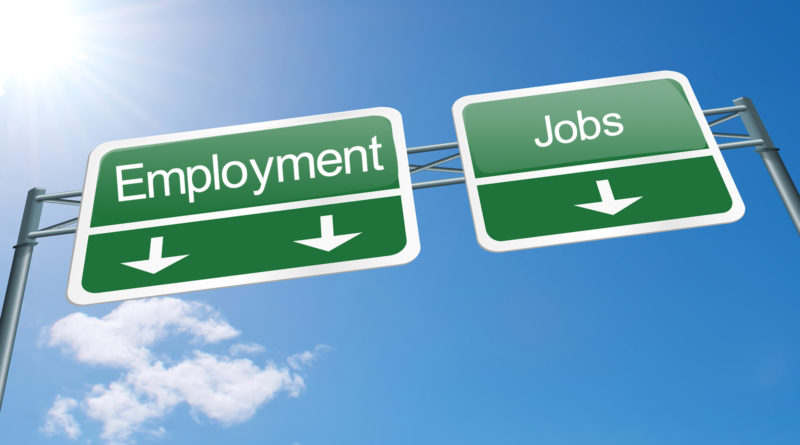 Today we live in a youth engrossed world where we aspire the world to be constructed by the youth itself. There are about 1.8 billion young heads between the ages of 10 and 24 – the largest youth population ever. Most of them relate to the developing countries. In fact, in the world’s 48 least developed countries, children and adolescents make up a majority of the population.  According to the International Labor Organization, more than 204 million people were unemployed in 2015. Sustainable development Goal-8, emphasizes on youth employment and decent work for all, provides for a new opportunity to mobilize broad global partnerships to support action on a more significant scale. Increased investment is needed to alleviate the scars of the crisis on the present generation as well as to ensure more inclusive labor markets and societies.
Latest UN report suggests that, India has the highest number of youth population i.e. 356 million people between the age of 10-24 despite of lesser populace than China. It occupies the second position with 269 million young people, followed by Indonesia (67 million), the US (65 million) and Pakistan (59 million), Nigeria with 57 million, Brazil with 51 million, and Bangladesh with 48 million, the United Nations Population Fund’s (UNFPA,2014) State of the World’s Population report said.
These young people face continuous challenge of extreme poverty, discrimination or lack of information networks. But with proper investment in their education and opportunities, these young people’s ideas, ideals and innovations could transform the future.”Young people are the innovators, creators, builders and leaders of the future”. But they can transform the future only if they have skills, health, decision-making, and real choices in life.
Recognizing the youth unemployment, Azita Berar Awad, Director of the ILO’s Employment Policy Department says that, “The time has come to scale up action in support of youth employment” (Azita Berar Awad, 2015). The swift movement in work pattern with modern technology of work and employment relationship as well as new forms of start-ups, require constant adjustment to new labor market conditions and addressing skills mismatches. The key policy makers of India recognize the potential of youth population and affirm that it could be enhanced from ‘demographic dividend’, which can happen only when a county’s working age population is larger than the dependent population. Today Indian policy makers have shifted their radars towards startup friendly policies and a business friendly environment. To do so, India also needs to nurture its entrepreneurial ecosystem to create more “start-ups” as well as consolidate the job environment. There should be a microscopic focus on creating fresh opportunities.
START UP INDIA
The startup India program was first espoused by Narendra Modi in 2015 Independence day address and officially launched on 16th January 2016. The initiative is a flagship program of the Government of India, planned for strong eco-system or nurturing innovation and Startups in the country that will drive sustainable economic growth and become highway for employment generation to reap the benefit of population dividend. The plan comes at a time when the startup ecosystem in the country is witnessing an exponential growth. Most of the people dream of starting up their own business, but they fail due to financial constraints. Thus to help them in pursuit of endeavor, the Indian government under the leadership of Narendra Modi has decided to offer a gift of “Start up India”.
Narender Modi in his speech acknowledged that Indians have ideas and capability, all the need is a little push.
“Start Up India” is a revolutionary scheme that has been started to help the people who wish to start their own business. These people have ideas and capability, so the government will give them support to make sure they can implement their ideas and grow. Success of this scheme will eventually make India, a better economy and a strong nation.

India as a Startup Nation

Opportunities and challenges for entrepreneurship in emerging economy are different from the issues of west. A country like India can serve as a laboratory of sorts for new business models that works in terms of affordability with the potential to leapfrog social impact. But there are stone which needs to be turned such as, technology is not mature, and there are not enough role models and mentors in developing countries in general. Furthermore, funding exists but it is not well allocated across the startup economy. Instead many entrepreneurs use informal sources of funding, such as help from friends and family. We need to look at mechanisms to improve access to finance for entrepreneurs, so that startup funding can provide greater value. Therefore strengthening the startup ecosystem is required (Mr. S. Gopalakrishna, 2015).
India’s importance can be understood by its global ranking at third position, with more than 4200 startups.  Key drivers reflect by the registered growth of 2.3X in number of active investors, growing digital consumer base, mobile first population, improving political environment and high investors. Bangalore, National Capital Region (NCR) and Mumbai continue to be the top startups destinations with nearly 65 percent of Indian startups. NCR witnesses the maximum amount of funding, driven by high share of e-commerce (B2C) focused startups. Hyderabad, Chennai, Pune, Jaipur and Ahmadabad are the major upcoming start-up locations in India.
A recent NASSCOM led study shows that, India has around 4400 startups with 85000 of employees. Total funding till 2015 in startups is estimated to be $6.5 billion. This excludes funding in startups incorporated before 2010, such as Flipkart, Quickr, Practo, Zomato, and Inmobi, which, if taken into account, will further inflate the investment figure.
Figure 1 gives the detailed picture of technology based startups in India till 2015, were e-commerce leads with 820 startups (CII, 2015). 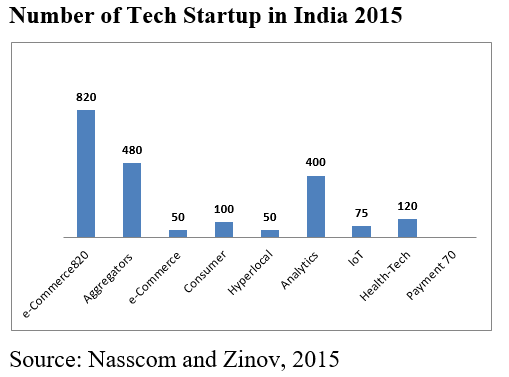 To realize the objective of start-ups, government of India has come up with an action plan 2016, which is further divided across the following areas-:

• Simplification and Handholding
Here simplification means to simplify the time consuming various regulatory formalities compliance with various labour and environment laws. Start-ups firms are unaware of nuances of the issues and can be subjected to intrusive action by regulatory agencies. In order to make compliance for Startups friendly and flexible, simplifications are required in the regulatory regime. The Government of India has taken various measures to improve the ease of doing business and is also building an exciting and enabling environment for these Startups, with the launch of the “Start up India” movement. Mobile app and portals are introduced to serve as single window for the communication between startups, government and regulatory institutions. Government is also providing legal support and fast tracking patent examination at lower cost.

• Funding Support and Incentives
Finance is the key challenge faced by start-ups in India. In order to provide financial support to Startups, Government will set up a fund with an initial corpus of INR 2,500 crore and a total corpus of INR 10,000 crore over a period 4 years (i.e. INR 2,500 crore per year) . The Fund will be in the nature of Fund of Funds, which means that it will not invest directly into Startups, but shall participate in the capital of SEBI registered Venture Funds. Credit guarantee mechanism through National Credit Guarantee Trust Company (NCGTC)/ SIDBI is being envisaged with a budgetary Corpus of INR 500 crore per year for the next four years is maintained to encourage Banks and other Lenders to provide Venture Debts to Startups in high risk zones.
Tax exemption on capital gains and startups for first three year is given to promote the growth and address the working capital requirement. To encourage seed-capital investment in Startups tax exemption on investment above fair market value is given.

• Industry-Academia Partnership and Incubation
To serve as a platform for promotion of world-class Innovation Hubs, Grand Challenges, Startup businesses and other self-employment activities, particularly in technology driven areas government has launched the Atal Innovation Mission (AIM) with self-employment and talent utilization (SETU) program. 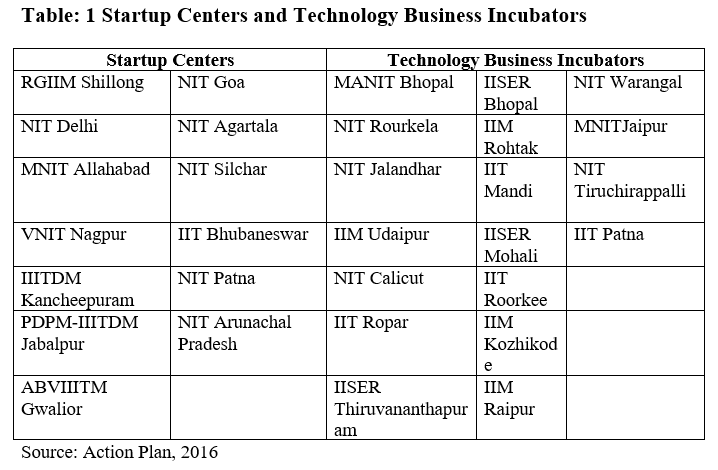 Incubation facilities provides physical infrastructure, provision of mentorship support, access to networks, access to market, etc. Out of all these features, physical infrastructure entails large capital investments which can generally be facilitated by the Government. India currently lacks in incubation trough out the country. Considering this, government shall step up to set up:
35 new incubator in existing institutes and 35 new private sector incubators with funding support of 40 percent and 50 percent respectively with 20 percent provided by respective state governments for the set up of new incubator in existing universities ( subject to a maximum of INR 10 crore) .
In order to augment the incubation and R&D efforts in the country, the Government will set up/ scale up 31 centre (to provide facilities for over 1,200 new Startups) of innovation and entrepreneurship at national institutes, including 13 Startup centre (see table: 1), with Annual funding support of INR 50 lakhs (shared 50:50 by DST and MHRD). It shall be provided for three years for encouraging students driven Startups from the host institute, and setting-up/ Scaling-up 18 Technology Business Incubators (TBIs) at NITs/IITs/IIMs etc. as per funding model of DST with MHRD providing smooth approvals for TBI to have separate society and built up space.

To boost up innovation through incubation and joint R&D efforts between academia and industry The Government shall set up 7 new Research Parks at IIT Guwahati, IIT Hyderabad, IIt Kanpur, IIT Kharagpur, IISc Banglore , IIT Gandhinagar and IIT delhi with an initial investment of INR 100 crore each. The Research Parks shall be modeled based on the Research Park setup at IIT Madras.
At the same time there are many courses on entrepreneurship at universities and colleges across the country, the vocational training courses are not geared with advanced technology or startups. The policy makers are moving towards new support programs and policies being implemented and a startup act is under consideration.

Conclusion
There is both an opportunity and scope underlying with the program and this is the core strength if the entire formulation of the idea of Startup India. Start-ups become the highway of employment generation only when we equip youth with the best of opportunity and skills to turn it into a decent job. But this calls for investing in education and training of the highest possible quality, providing youth with skills that match labor market demands, giving them access to social protection and basic services regardless of their contract type, as well as leveling the playing field so that all aspiring youth can attain productive employment regardless of their gender, income level or socio-economic background.
The government has regularly shown interest to support the startup ecosystem and Startup India is expected to take it ahead with introduction of key policy reforms. The Initiatives like Skill India and Make in India are the biggest enablers for providing boost to startups.
The country can only reach the endeavored goal of Sustainable development when the model adopted is coupled with youth development and engagement and therefore Start up India is the future that can transcend all challenges of inclusive development.