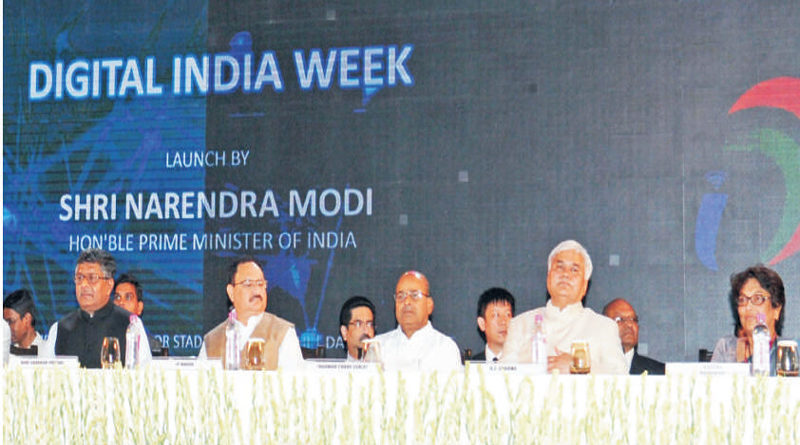 Even by the standards of the silver-tongued Narendra Modi, it was no mean feat. The prime minister not only could bring together the likes of Mukesh Ambani, Cyrus Mistry, Azim Premji and Sunil Mittal, but also got an assurance for an investment of around Rs. 4.5 lakh crore from them in his Digital India initiative. The IT industry, predictably, is upbeat about the project. So is the fast-growing app developers’ community. It is expected that technology professionals and startups will develop applications using digital technologies to address a wide range of issues, especially in education and health care.

Hardware and telecom companies stand to benefit from the project. “Most of the government spending will go to purchasing servers, massive storage networks and telecommunications cables and switches,” said Rahul De, Hewlett-Packard Chair professor at Indian Institute of Management, Bangalore. “Firms that make software for the new initiatives will also benefit.”

He said it was an opportunity for India’s stunted hardware manufacturing sector. “India does not really have an IT hardware manufacturing industry. We do make mobile phones, but most components are sourced from abroad. Massive investment will be targeted at hard ware. Moreover, there will be a lot of entrepreneurial activity devoted to delivering the promises of the Digital India campaign,” he said.

The Digital India programme is all about improving the quality of life for the common man.

So companies that are facilitators and enabler s of key user applications will have an important role to play. “For instance, a company which can facilitate e-governance via easy-to-use applications, or a company which connects a small businessman to the grid of technologies, will have immense opportunities in this campaign,” said Deepankar Biswas, CEO of OfferGrid, which is a platform to help brands promote products and services across digital channels.

And, the scale of the business can be massive. “India has only 20 crore people online right now on the digital grid, of whom probably 10 crore are active. We are expecting a 10-fold growth,” said Biswas.

The bigger players are already chalking out their plans. Cognizant India, for instance, is all set to leverage its expertise in social, mobile, analytics and cloud, or SMAC. “Digital India will open up new avenues in the area of citizen services. More than 80 crore Indians have registered with UID. If this database is integrated with other information that resides with government and quasigovernment agencies and is technology-enabled, it will simplify transactions between citizens and the government” said R. Chandrasekaran, executive vice chairman, Cognizant India.

Digital India could be one big opportunity to salvage Modi’s Make in India campaign, which so far has failed to make anything other than noise. “The Digital India campaign’s thrust on the Electronics Development Fund will facilitate inclusive growth in electronic services, products, manufacturing and job opportunities, and will reduce dependence on imports,” said M.N. Vidyashankar, president, India Electronics and Semiconductor Association.

The success of the Digital India initiative will depend on how well different government agencies collaborate, with each other as well as with private players. “Government is an enterprise of multiple enterprises—more so in our country with distributed jurisdictions spread across unions, states and local bodies,” said Rahul Rishi, partner (advisory services), Ernst & Young India, “Success of Digital India depends on aggregation, collaboration and convergence among these enterprises. I believe there is a need to evolve a model of engagement where India’s talent can be effectively engaged to execute Digital India’s agenda. Ironically, other nations have been more effective in using Indian expertise to achieve their own digital governance.”