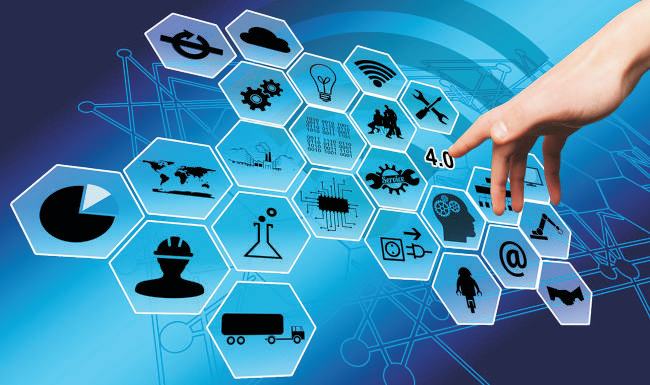 The world today has endowed technology with such powers that it shapes both the achievements and the polarising divisions that co-exist in our societies and economies. History bears witness to the nature and extent to which mankind was liberated from animal and human labour, paving way for mass production and consumption in the Second Industrial Revolution era. The then existing manufacturing landscape was further enriched with wider dimensions brought by computerised technology in the Third Industrial Revolution. With this age ushering towards a more dynamic Fourth Industrial Revolution, technology will become more influential in governing the affairs of our societies, determining and shaping our values, norms and political systems.

Considered as an upgrade of the Third Industrial Revolution, the Fourth Industrial Revolution is expected to mark a fusion of technologies, straddling the physical, biological and digital worlds. It represents an Intricate arrangement of cyber- physical systems, Internet of Things (IoT) and Internet of Systems. What makes it phenomenal is the exponential rate at which this revolution is pacing, thereby creating possibilities for billions of people over the globe to be connected with unprecedented processing powers, storage capacities and access to knowledge. Emerging technologies like artificial intelligence, big data, robotics, nanotechnology and Internet of Things are only going to act as amplifiers to our existing systems. This new range of technologies will impact all disciplines, industries and economies remarkably.

As of now, there is a lack of integration of systems, departments such as engineering, production and service are not closely linked to one another. With the advent of Industry 4.0, companies, departments and functions will become much more cohesive and there will be creation of common workspaces for design and manufacturing collaborations among multiple players. Simulation will be used extensively to leverage real time data to mirror the physical world in a virtual model allowing operators to configure and optimize machine settings for the next product in line before the physical changeover.

Manufacturing industries already use digital technologies, but the stimulus provided by the Fourth Industrial Revolution will radically transform industrial production.

Powered by technological trends like big data analytics, simulation, autonomous robots, augmented reality and IoT, this process of advancement will connect sensors, machines and IT systems along the value chain beyond a single enterprise. These cyber – physical systems will be able to interact with one another and analyse data to configure themselves and simultaneously adapt to changes. It will become possible to seamlessly gather and analyse data across machines, which will cater speed, flexibility and efficiency to produce higher quality goods at lower costs. The outcome will be greater manufacturing productivity leading to competitiveness across economies, ultimately fostering and boosting economic growth all across the globe.

Manufacturers will make use of autonomous robots with high end sensors and control units that will facilitate close interaction with humans. For instance, industrial robotic supplier ABB is launching a dual arm robot called YuMi, designed for automation where it will be used to work alongside human in small parts assembly. The increasingly pervasive nature of the Internet of Things which is going to connect multitudes of machines, analytics and the people working behind them is going to change the nature of our industries forever. By combining the elements of machine to machine learning, big data and cyber security, Internet of Things will drive unprecedented levels of efficiency, productivity and performance.

According to Professor Schaub, Founder and Executive Chairman of World Economic Forum, “The Fourth Industrial Revolution will change our lives completely, it will not only change how we communicate, how we produce, how we consume, it will change our whole identity.” I t shall witness tremendous degree of developments like smart traffic, small cities, smart governments which will be integrated into an ecosystem, driven by big data. From selfdriving cars, drones to genome editing, glimpses of artificial intelligence are already around us.

As various technological platforms evolve and converge, they would increasingly empower the citizens to engage with their governments and systems of governance. As a result, the governments facing pressure will have to alter their approach and incorporate elements of public engagement in policy making. This is therefore a reiteration of the very idea of development of Industrial Revolution which strives to bring people at the centre of our systems.

While the impending changes appear assuring, the pattern of consumption, production and the employment thus generated poses challenges. The variables of socioeconomic, geopolitical and demographic conditions which constantly vary, reflect and amplify one another will need to be addressed. The question is how governments, businesses and individuals will respond to such rapid transformations. It is important that corporates take an active role in supporting their workforce, individuals enhance their learning skills and governments provide a nurturing environment to assist these efforts. This technological revolution must therefore not become a competition between humans and machines but an opportunity for development to become a channel through which individuals truly recognise and exceed their full potential. The responsibility is therefore on our shoulders, to realise that this revolution is not about technology itself but for the creation of new possibilities for mankind and this planet.

The Fourth industrial revolution however promising does raise legitimate questions. It is crucial to take note from the past experiences that industrial revolutions over the globe have never been evenly distributed. There exists societies that are yet to receive benefits from the previous industrial revolutions. In such a scenario, the Fourth Industrial Revolution has an even greater task to perform, to serve as a formidable accelerator of social inclusion. It must aim at helping communities which otherwise have been eclipsed from the frontline to become more resilient. To empower and strengthen societies which have been excluded from the advances mankind has previously witnessed, the Fourth Industrial Revolution should help mitigate the socio-economic, political and environmental challenges that our world faces today.

Engaging with such exceptional technological advancements must therefore provide a means to ensure inclusion of social and economic systems. To effectively shape this transformation, producers and suppliers must take decisive actions to embrace the foundation pillars of this advancement and address the need to adopt the appropriate infrastructure and education. EMankind today stands at the brink of a revolutionary technological evolution, which has the potential to compliment the best of human nature – his creative powers and cognitive skills, and therefore has enormous capacity to lift humanity into a collective and morally conscience society. It shall be our responsibility to ensure that the latter prevails and guides this civilization towards a future that is a true reflection of our common objectives and value systems.