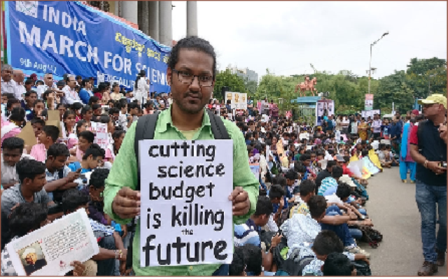 The rally is being organized to put a stop to the propagation of “unscientific”, “obscurantist” ideas and increase the funding for science and promote scientific research, said a media release issued in Pune as part of the march.

“We note with deep concern that financial support to even premier institutions like IITs, NITs, and IISERs has been slashed. Universities are facing shortage of funds to adequately support scientific research. Research funding agencies like DST, DBT and CSIR are reportedly impacted by reduced governmental support. Scientists in government laboratories are being asked to generate a part of their salary by selling their inventions and from other sources,” said an appeal by scientists which was released as part of the march.

‘While we can justly be inspired by the great achievements in science and technology in ancient India,’ the appeal also said that, ‘we see that non-scientific ideas lacking in evidence are being propagated as science by persons in high positions, fueling a confrontational chauvinism in lieu of true patriotism that we cherish.’

“Promoting scientific bent of mind can certainly help improve the social health of our country where incidents of witch hunting, honour killing and mob lynching are reported regularly,” added the appeal.

‘India March for Science’ event has been organized throughout the country, particularly in the state capitals, on 9th August 2017, with the following demands:

The Delhi Organizing Committee, India March for Science will hold the ‘March’ which will start from Mandi House to Jantar Mantar at 4.00PM. 9 August, 2017.

Immunologist Vineeta Bal, who is one of the organisers in Pune, said the march will start from Mahatma Gandhi statue near Railway station and will conclude at Ambedkar statue.

“Large number of researchers, scientists, teachers and students are expected to participate in the march tomorrow,” she said. Bal also claimed that eminent scientist Jayant Narlikar has supported the cause.