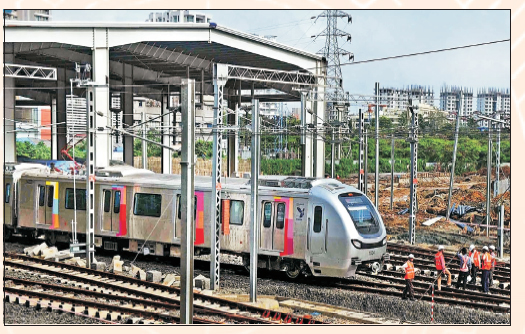 The inaugural trial run of India’s first metro train to be equipped for Unattended Train Operation (UTO) was flagged off by India’s urban development minister Mr M Venkaiah Naidu and the chief minister of Delhi Mr Arvind Kejriwal in a ceremony at Delhi Metro Rail Corporation’s Mukundpur depot on May 17 2016.

Driverless trains have the advantage of not committing human error. Automated metro trains are more energy-efficient and always run on schedule. It is said that energy consumption by these trains can be cut by 30% depending on the degree of automation. Moreover, these trains will be able to carry 50 passengers more in each coach as compared to the driver-driven metro trains. Considering the driverless metro networks in advanced cities of the world whose safety records are generally excellent, we should not worry much about the safety of driverless trains in Delhi.

Some of the advanced features in these driverless trains are: 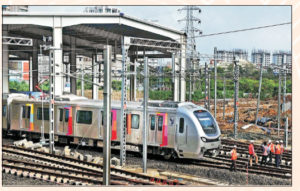 In metro systems, automation refers to the process by which responsibility for operation management of the trains is transferred from the driver to the train control system.

According to the International Association of Public Transport (UITP), there are five Grades of Automation (GoA) of trains:

Technical progress has made train control systems capable of supervising, operating and controlling the entire operational process. The key elements for this are:

But increasingly, modern networks like the Dubai Metro, Tokyo’s Yurikamome and elements of the metro networks in Paris and Barcelona are embracing true driverless systems, with trains run automatically with no onboard staff necessary. All operations are overseen by a vast array of remote technologies, from CCTV and onboard telemetry to automatic detection systems. These advanced lines are monitored by a control centre that tracks all trains and potential hazards.

As the technology continues to mature, it has spread beyond the developed world, with cities like Delhi and Shanghai in various stages of driverless development for their metro systems. In March this year, the Delhi Metro Rail Corp received a bid from Thales to implement its SelTrac communication-based control system. A remotely controlled, automatic system is being heavily indicated for inclusion as part of the Delhi Metro’s next phase of expansion.

Unattended Train Operation has many benefits and many beneficiaries: customers, operators, funding authorities and staff.

The implementation of UTO systems allow operators to optimize the running time of trains, increasing the average speed of the system, shortening headways up to 75 seconds, and reducing dwell time in stations (in optimal conditions) to 15 seconds.

By taking the human factor out of the driving equation, operators gain flexibility and can make better use of assets. UTO systems offer a more tailored service coverage, reducing overcapacity supply at off-peak hours and enabling operators to inject trains in response to sudden surges in demand, for example in the case of big events.

UTO systems also offer safer operations by reducing the human-risk factor; well designed UTO systems have proven to be more reliable than conventional metros and hold an impressive safety record. Platform and track incidents aside, there has been only one operational incident in Osaka, at the end of the 80s, when a train did not stop at terminus and hit a bumper stop, provoking injuries in a few dozen passengers.

Increase in Quality of Service

Overall, passengers perceive an increased quality of service, thanks to the enhanced reliability of trains and shorter waiting times in platforms. The re-deployment of staff in stations also increases passenger’s level of subjective safety and security.