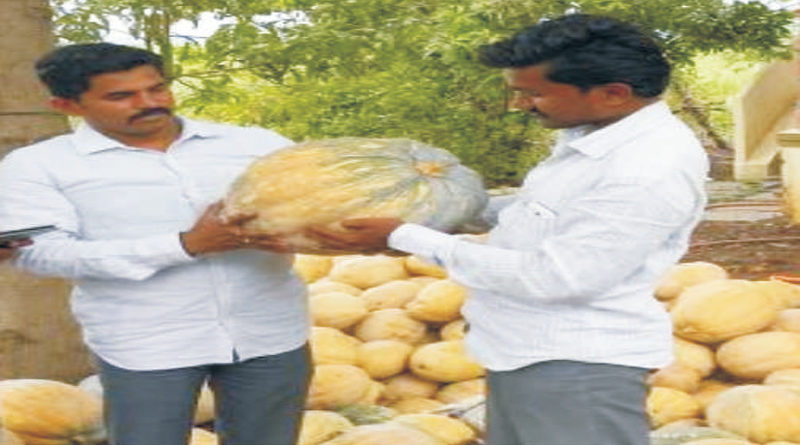 Times are surely changing and many farmers have become tech-savvy. They get latest information on the tablet. They discuss weather, market price, sowing and harvesting tips, organic farming, disease and pest control, and even current politics. We make the best use of all subsidies and benefits extended to us by the government. In 2012 and 2014, Shrishail Meti, a farmer from Sunag village in Bilagi taluk of BagaJkot district in Karnataka, lost his sugar-cane crop on 12 acres to root borer, an insect that attacks the root. The local agriculture centre’s advice that he spray chemicals did little to salvage the crop.

This year, Meti, 40, used a different method—valve irrigation, which supplies water and pesticide directly to the root, and fertigation. What saved the day for Meti was the Namma Raitha tablet, which the NGO eKisaan Foundation had given him free of cost. Using the tablet, he uploaded the photographs of his crop and immediately got the remedy from agriculture scientists. “Last time, the pest attacked the root as there was intermittent dry and wet weather,” he says. “The plant appeared normal even after the pest attack. After I got the tablet, I studied the disease closely and shared notes and photographs with experts. I zeroed in on the method best suited for my farm.”

The Namma Raitha initiative was launched by the eKisaan Foundation, set up by US-based software professionals S.R. Gourishankar, Srikanta Bhaskar and Pramit Maakoday, across 1,500 farmers’ clubs (a grassroots-level informal group with 10-15 members each) in Bagalkot and Bijapur districts last February. Gourishankar says if India wants to boost its GDP, it should empower farmers. “Democratisation of information is a must,” he says. “We had the idea and the software solution to educate, engage and empower the farmer, but we needed support to implement it. And with encouragement from Information Technology and Biotechnology Minister S.R. Patil, the pilot project took off with 250 farmers.” There was a lot of scepticism initially. “But, donors like Infosys Foundation, ELCITA, Airtel and Biocon and individuals came forward to sponsor the tablets [costing Rs. 10,000 apiece],” says Gourishankar. “We succeeded in minimising the hardware cost [Rs. 7 700 , apiece] by designing it ourselves and later giving the order to China.”

Take, for instance, Dundapa Koraddi, 32, from Jambagi village in Bijapur district who grows sugarcane on his 50 acre-farm. “I read about alternative crops and am preparing to sow capsicum and Byadagi chilli in about three acres,” he says. “I found out that capsicum fetches a good price and has a local market, too.” Chilli is a good intercrop or trap crop, says Ramakrishna Omkar, a farmer from Hosura village in

Bijapur, as it attracts pests like moths and thus saves the main crop. Also, the additional income is always welcome. “Intercrop enhances soil fertility, works as weed control and boosts yield in the main crop. eKisaan has helped us get information without having to go to agriculture universities,” says Omkar.

‘Share experience, replicate success’ is eKisaan’s motto. So, on hearing about a farmer in Mahalingeshwar exporting jaggery made of organically grown sugarcane, Omkar, too, has decided to venture into organic farming. “Organic products fetch a higher price,” he says, “Organic farming will save us from the perils of long-term usage of chemicals, which reduces soil fertility, causes crop damage, affects the health of farmers and is detrimental to farming in the long run.”

When in douht, farmers can always turn to ‘Ask the expert’ on the tablet. Premature dropping of mangoes, red 4nts attacking pumpkin leaves and white aphids ruining sugarcanes no longer cause panic as farmers use the tablet to fish out a remedy. Says Alok D. Sulakhe, project manager, eKisaan Foundation, “We uploaded 500 videos, audios and text to provide seasonal updates and had a pool of experts from agriculture universities in Raichur, Dharwad, Bengaluru and Bijapur to answer queries.” Small and marginal farmers are also benefiting from the initiative as they interact with educated farmers in the clubs. “We registered with APMC for real-timemarket trends, Krishi Vigyan Kendras for information on weather forecast and general information on seeds, fertilisers and subsidies. We channel all information through cloud-based mobility framework,” says Sulakhe.

A gradual shift from traditional mindset and methods to modern farming has created a market for agriculture engineering products, too. Srinivas Nidoni, 24, a farmer from Chikkayalagali village, has replaced his ox with a power tiller. “I recently purchased a power tiller as my ox cannot till more than ten acres of land. When farming is facing severe labour shortage, modern equipment and pooling of agriculture implements are aboon,”hesays.

Will the eKisaan experiment be replicated in other districts? “With rapid urbanisation, the extent of land under agriculture is shrinking. Technology can play a crucial role in enhancing agriculture production and productivity and empowering farming communities,” says minister Patil, a law graduate who is a farmer himself. “I hope to see the initiative spread to other districts and states. Many chief ministers and the speaker of the Lok Sabha have appreciated the initiative.”

But expansion of the project, say promoters, would require additional infrastructure, trained manpower and funding as recurring cost for keeping the interactive platform relevant is huge.